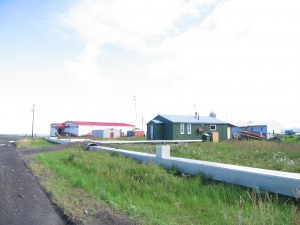 The village of St. Michael is one of many places in Alaska that was born as a result of settlement by the Russian-American Company. The RAC, whose primary goal was to find fur-bearing animals and other valuable natural resources, sought to exploit the raw materials in Alaska. Their chain of settlements were made in an attempt to develop an empire that stretched along the West Coast of the American continent, from Alaska to Mexico. Before Russian incursion, St Michaels had functioned as a trading point for Yup’ik and Inupiaq peoples as it was positioned near where the borders of the two people’s lands begin to blur. In 1833, the RAC established a trading post called Redoubt St. Michaels on the small, shoreline-adjacent island in the Bering Sea that the Russians also named after the archangel Michael, forever changing the history and human geography of the area.

St. Michael’s location on the Norton Sound means it is exposed to the hazards caused by weather as the harsh tides of the Bering Sea batter the coastline. A little over 9 miles long by 6 miles wide, the island of St Michael also houses the village of Stebbins; in total, there are just under a thousand people residing on the island. Although it is very close to land, it is disconnected from the mainland by meandering rivers and waterways. Because it is an island community, it is less feasible for residents to move away from the island’s dangers than their counterparts in mainland villages threatened by erosion such as Kivalina and Shishmaref.

Islands are particularly vulnerable to hazards because they are surrounded by tempestuous waters. Due to the seismicity of the area (there is evidence of volcanic activity in the immediate area) high waves and tsunamis as a concern for St. Michael’s houses, built at just 26 feet above sea level. Underwater or terrestrial earthquakes could also cause damage from shaking. But the greatest threat to St. Michael is climate change in the form of global temperature rise, which results in the melting of permafrost. The entire island of St Michael is subject to damage from permafrost melt. Currently, efforts are being made to reinforce existing buildings and to build new structures that are better equipped to handle changes in soil. Temperature rise will also increase localized flooding, and erosion will also occur as the permafrost continues to melt, causing even more damage.

Temperature in St. Michael varies greatly throughout the year, peaking in the summer in the 60s and with extreme winter lows in the -20s. Mostly dry winters are followed by summer days when daily precipitation totals can reach 2.5 inches, and no matter the time of year, the weather is usually overcast and gray. It is further disconnected from the next closest large town of Nome in that it is not on the road system, however it can be accessed by boat when the water is free of ice.

Boom
St. Michael was founded at the peak of the sea fur boom, when Russian promyshlenniki took the hides of seals, otters and other small furbearers from the Alaskan waters. It functioned as a trade outpost for the Russians, but was not densely populated until long after they had gone. At the start of the Klondike gold rush at the turn of the 20th century, miners and prospectors flocked to the Yukon River. Fort St Michael was established as a United States installation, placing forces close by in case action was needed in the Klondike. The subsequent gold rush in nearby Nome further increased activity in St. Michael, swelling its population to 10,000. The fort was deactivated in the 1920s, and the population returned to being mostly Yup’ik. Due to the island’s lack of a deepwater port, it has not seen as much activity in commercial fishing as other communities on the Bering Sea. This has also prevented it from becoming a part of the oil and gas supply chain until recently, when an oil company opened a small terminal and retail operation in the city. As both typically rely on petroleum fuels, Stebbins and St. Michael are in the process of installing renewable energy producing products: solar panel arrays, as well as a field of wind turbines.

Currently only one regional air carrier serves the St Michael airport, with service to Stebbins and Unalakleet where one may access a connection to Anchorage. The airport runway is not long enough to support large jets that may bring loads of passengers, and there is little in the way of attractions for tourists (unless they are the sort who see novelty in a traditional subsistence lifestyle).

Perhaps the most important thing that St. Michaels has to offer those who do not call it home is the information about how communities deal with permafrost melt, as this community is in the throes of it. How they work together to repair damage and prevent further damage from occurring, as well as how they adapt to the environmental changes around them, can function as a case study for other Alaskan and Arctic communities.