Nulato is an Alaskan settlement located on the western bank of the Yukon River, some 35 miles downstream from Galena or 310 air miles due west from Fairbanks. See Figures 1 — 3 for a better perspective on Nulato’s location. 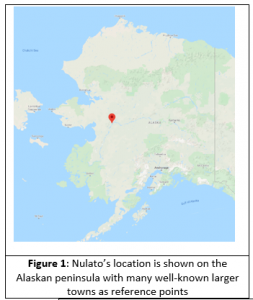 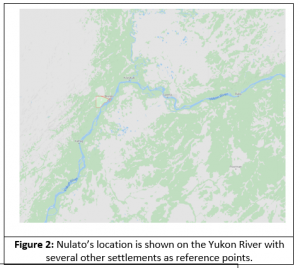 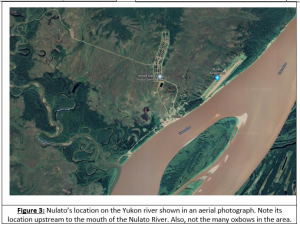 This location puts Nulato in the Intermonte Basins and Plateaus physiographic unit. As such the terrain here is rather gentle and mild. To the north of the town there are many small ridgelines at roughly 1500 ft MSL. These ridges are separated by broad flat valleys. To the south of town across the Yukon River, there is a large flat region pot marked with small lakes/ponds and soughs. After roughly 12 miles, the marshy flatlands gives way to hills roughly 2500 ft MSL tall. The forests here are lowland and upland spruce and hardwood; with lowland forests being found to the south and upland to the north. Nulato lies in the Bergina Boreal, Temperate Continental Ecoregion of Alaska.

The climate of Nulato is dominated by continental factors/controls; this means that its location far inland allows for the earth’s crust to heat up and cool off rapidly. As such it is in the interior climatic region. This means that Nulato has hot summers and cold winters; the hottest days of the summer here can be in the 90s and temperatures in the winter can be in the minus 60s. It should be noted that Nulato is rather close to the Bering Sea Coast climate region.

Permafrost is discontinuous around Nulato as such buildings and infrastructure can be more readily constructed and relied on once built. It should be noted that the soils in this area are very silty and as such frost susceptible and erosion prone if flooded.

Natural hazards surrounding Nulato are primarily floods and ice jams due to its location on the banks of the Yukon River. This is a historical problem for this town and reports of erosion have been made and where investigated by the U.S. Army Corps of Engineers in 2007. Their baseline assessment can be viewed here, https://www.poa.usace.army.mil/Portals/34/docs/civilworks/BEA/Nulato_Final%20Report.pdf.

As the link above shows, no known damage was found from periodic floods and ice jams so this implies that the problem is well managed and the locals are well prepared to mitigate risks and damages from floods

The resource economy of Nulato is sparse. Trade was always the main source of income and resources for Nulato. In fact, Nulato’s tribal council states that the settlement was founded as a trading town due to its strategic location for trade alone the Yukon River.  In the mid to late 1800s steamboat travel was high on the river and would stop twice daily at Nulato for firewood, supplies and passengers.  1884 saw a gold rush with most miners leaving for Fairbanks or Nome by the early 1900s. In modern times the economy of Nulato is dependent on government funded employment such as BLM emergency firefighting or other short-term projects. There is little to no tourism here, though there are several air services companies which fly into the local airport. A reported 55% to 78% of Nulato’s workforce is “perpetually unemployed’[1]. As such most Nulato’s residents live a subsistence lifestyle.

In summation, I do not see much change in the future for Nulato. Its well off the beaten path and not threated by existential problems like Shishmaref. What natural problems the town faces (floods and ice jams) it deals with regularly and effectively. With no real outside influence (aside from providing employment) and no known developable resources I see no factors to change Nulato in meaningful way for the foreseeable future.

When asked what the most dangerous place in Alaska is, I would have to argue that the low-lying areas in the Cook Inlet, Turnagain/Knik Arms are the most dangerous. This is due to the area’s low elevation, proximity to volcanoes, seismically active zones, and poor geologic properties of the Anchorage “bowl.’ The makes the area in question highly vulnerable to earthquakes and tsunamis. The low quality of the soils in this area means that building’s foundations may more readily fall to the effects of an earthquake. This can be further exacerbated should liquefaction come into play. Furthermore, the funnel shape of the inlet could direct a tsunami right at Anchorage and the surrounding communities. While most places in Alaska can experience some form of natural disaster, Anchorage is in the perfect location to be hit with several at once. If such an event would happen the whole state would see shortages in vital supplies; such shortages would likely last for sometime and cause serious problems in areas never directly effected by the natural disaster. Such wide spreading effects is what makes this location so unique. For example, Kodiak Island could be hit with a tsunami and the other side of the island would be rather sheltered, perhaps saving lives and infrastructure. The Cook Inlet area has no such saving grace.

I have always found maps very interesting. The ways in which they can be presented via different projections reminds be of plotting data on different types of axes (normal vs log scale). Both methods, (just like different projections) present the same data but the data can look very different when compared side by side. As such, the differing methods of data presentation stress differing features of the data.

The first projection that stands out to me is the Mercator Projection. This projection undeniably distorts the polar regions. But this is simply the “cost of doing business’ to create a map optimized for navigation. However, while this makes bearings easier, how did early navigators correct for the polar distortions in distance?

The Peters Projection never made much sense to me from a functional stand point. It does a good job of accurately presenting the area but what is its use? If accurate representation of area is that important to the task at hand why not get a globe?

Next the Orthographic Projection was striking to me. It reminded me of what I’ve heard old timers refer to as “pilot maps’ That is to say that if a line was drawn from New York to San Francisco on a “pilot map’ the same line would be arched on a more traditional projection like the Mercator. I don’t know if these two map projections are the same but they sure do look very similar.

Lastly, I found the Alaska Forest map to be interesting. I felt it really showed not just the varied nature of Alaska’s Forests, but also the massive amount of Alaska which simply have no forests. I know that there is a lot of non-forested lands in Alaska but this map really drove that point home!

I currently live outside Fairbanks. I have been here for going on 4 years and find it interesting how much environment is different here than down in Delta Junction. I think it is surprising how much of a change there is in a relatively short  distance. Those are the only two areas of Alaska which I have lived in and am looking forward to learn about more locations.