Marshall, Alaska is located in the west region of Alaska at latitude 61.8791 and longitude -162.087 (DCRA). This community is just outside of the Yukon-Delta National Refuge and near the lower end of the Yukon River and the Yukon-Kuskokwim Delta. The physiography of the area is within the Intermontane Basins and Plateaus regions. Temperatures are moderate in this region since Marshall is within the Bering Sea Coast climate region. This area receives about 16 inches a year of precipitation and the average temperature is 51 degrees (Lesson 5 Climate). This land is in an area of discontinuous permafrost and is considered a subarctic tundra. Looking further into the ecoregion, Marshall is located on the edge of the Nulato Hills (figure 6.16, Lesson 6) nested between Pilcher Mountain and Okumaik Mountain. Marshall has Bottomland and Coast Western Hemlock-Sitka Spruce trees (Figure 6.13, Lesson 6). The DCRA considers Marshall a transitional area of tundra and boreal forests. From examining the ecoregion map Marshall is on the border of the Lower-Yukon Delta and Nulato Hills.   The Lower-Yukon Delta has a high amount of glacier sediment brought down through the river (Alaska Fish and Game). The community itself stretches a total of 4.7 square miles (DCRA). 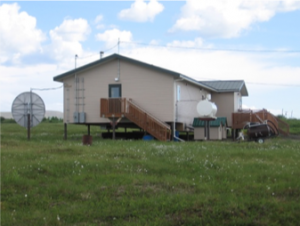 Marshall has several types of spruce trees within the transitional zone, this in particular makes forest fires another potential danger to the community. From the Alaska Wildfire page, many large forest fires have surrounded the community of Marshall in the past. Fortunately, none of the fires recorded by Alaska Wildfires have reached the community itself.   By examining the Alaska Earthquake Center’s map (below), Marshall is not in a large density earthquake area. The town is significantly far away from the subduction zone and interior Alaska where most earthquakes appear. This area has a fairly low natural hazards risk. 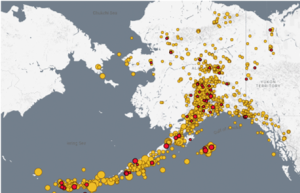 The first expedition to Marshall was in 1880 with a population of 120 people, and more than 30 years later gold was discovered (DCRA). From YukonAlaska.com, Marshall was the 25th known mining camp during the early 1900’s for both silver and gold. Most of the mining was placer mining from Wilson Creek.

By analyzing the Renewable Energy Atlas of Alaska, Marshall has oil within the area (see image to the right) but there is no documentation found about oil drilling near the community. 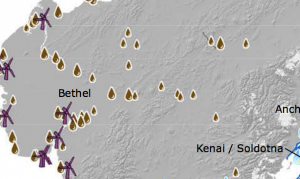 The community has potential for river power and heat recovery as a renewable energy source (see image below).

River power could be a source of energy in the summer when the river is finally ice-free. Due to the area that it is in, solar power is not an optimal energy source. However, wind is a potential resource, but the area is limited. According to the DCRA, this community relies on subsistence and fishing.   Many types of fish spawn in the Yukon including five types of salmon, Dolly Varden, and Arctic grayling (Alaska Department of Fish and Game).

Marshall has seen booms for fishing and mining, and is in a low hazardous region. Since there is oil near Marshall, there may be potential for oil drilling in the area. However, it may be challenging since the community relies on fishing and is located Native land. Since Marshall was once a goldmine community and it is on the Yukon, it could potentially see a small amount of tourism, if the Yukon becomes a popular tourist route.

After comparing from a variety of resources such as the Alaska National Weather Service, Alaska Volcano Observatory, Alaska Wildland Fire Information, as well as the Alaska Department of Natural Resources and documenting the natural disasters I think I have determined the most hazardous area in Alaska. It was hard to make the region smaller since there were so many events throughout history that could not be ignored. The area of Alaska which I think is the most hazardous is from just West of the Cook Inlet to Palmer, down the Kenai Peninsula. 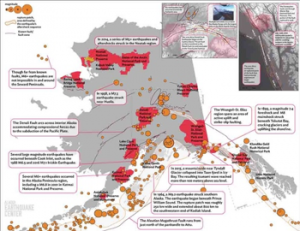 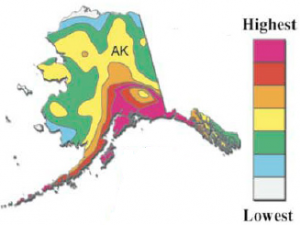 Tsunamis: According to History.com, the 1964 Alaska earthquake also triggered a tsunami in Kodiak, Whitter, and Seward. Since this region is coastal, tsunamis could potentially become a disaster depending on earthquake or landslide activity. Even though the largest tsunami happened in Lituya Bay, others occurred within the Kenai Peninsula region.

Volcanoes: Based on the tectonic plates and the type of plate boundary, there are many volcanoes along the southern coast of Alaska and Aleutian Islands. Several of these volcanoes have erupted within the last hundred years and many are still active. Mt. Redoubt erupted in five times since being recorded in 1778 (geology.com). The explosive eruptions damaged homes from the volcanic ash. Other volcanoes within the area include: Augstine, Spurr, and Iliamna.

Floods: Some of the volcanic eruptions caused glacial flooding within the region and other floods were caused by glacier dams. Both the Knik and Kenai rivers had floods which caused damages to the area. In 1995 the Kenai river flooded again and caused an estimated 10 million dollars in damages to the Seward and surrounding areas. (https://www.weather.gov/safety/flood-states-ak)

Fires: Although most of the major fires of Alaska occur within the interior, there are fires that take place within the Kenai Peninsula. Just last year there was a fire caused by lightning near Soldotna at Swan Lake. According to Alaska Wildland Fire Information, the fire was over 167,000 aches.
9/25/19 – 10:00 AM – Swan Lake Fire Fact Sheet and Public Information Map

Avalanches: To find a clear topical map of Alaska’s avalanches was a little more difficult to find. I based my information on recorded avalanche deaths from: Avalanche Accidents/ Incidents. Many deaths happened in various places of the state, however there were deaths within this region. There were high deaths in avalanches near Turnagain Pass, Kenai Mountains, and Crescent Lake.

I was born and raised in Anchorage, AK. I loved growing up in Anchorage because the summers are absolutely beautiful and the winters aren’t too cold. I have never lived anywhere else in the US or Alaska, but I have visited many places in Alaska and several states as well. I am now currently residing in Fairbanks for school.

My name is Mitchell Martinez I am a senior here at UAF but I recently transferred last semester from a small College in North Dakota called Valley City State University where I played football and coached. I have lived in Alaska most of my life but have traveled quite a bit out of state currently I live in North Pole. Alaska in general in a lot different then North Dakota and the rest of the United States the people, the landscape, and the way of life is very diverse. 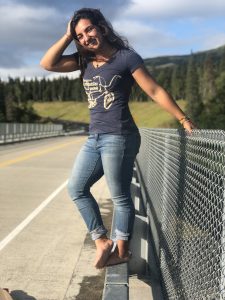 Hello fellow classmates! I am Aubrey Romo from Aleknagik Alaska. Aleknagik is located 20 miles of Dillingham in Bristol Bay.

I have lived in Alaska since 2002 and LOVE this state. When I was 17   I began working as a flyfishing guide in the Bristol Bay region, and have spent 4 seasons flying around for fishing adventures! It has been so fun to get a better understanding of the surrounding local area and I am hoping that in this class I will learn so much more about Alaska and it’s geography.

I’ve attached a photo as I like to be able to put a face to a name. Best wishes for this semester!

Hello everyone!   My name is Kaila.   I am majoring in Natural Resources Management.   I’m originally from a small town in Michigan (near Lake Michigan).   My family and I have been in Alaska for 4 years due to the Army.   I have recently parted ways from the Army and we’ve decided to stay here in Alaska.   We currently reside in North Pole, but we have traveled a little bit around Alaska to places like Anchorage, Seward, Valdez, Brooks Range area and a few views of the Yukon River.   My family and I love to hunt and fish and have been fortunate enough to see some pretty incredible views of this beautiful state.   I’m really excited to be in this class and to learn more about what Alaska has to offer, geographically speaking.